GUATEMALA HUEHUETENANGO Coffee is a Slowfood Presidium. A sophisticated coffee, grown on the high ground, which gives it a spicy and intense taste. Capsules are 100% compostable.

GUATEMALA HUEHUETENANGO Coffee, Slowfood presidium, comes from a region of Guatemala located at the Cuchumatanes, the highest mountain range in Central America not of volcanic origin. The hot air currents of the Tehuatepec isthmus meet the humid air that descends from the mountains and allow the cultivation of coffee up to 1900 m. of altitude.

The coffee of the Slowfood Presidium of the high lands of Huehuetenango is made from caffea arabica plants (of the Typica Bourbon and Caturra varieties) grown in the shade of tall trees. The harvest of ripe cherries is manual, they are then left to ferment for 24/36 hours, after which they are stripped. They sun dry for at least three days while they are continually turned with rakes.

San Domenico capsules are 100% compostable, both the packaging, that is completely made of recyclable paper materials, and the capsule, made of corn starch material, practically unrecognizable compared to plastic, but totally respectful of the environment. 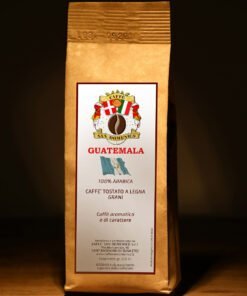 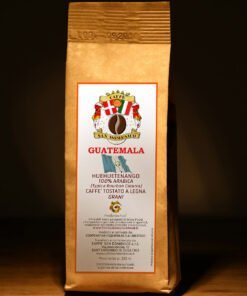